This is the fourth post in the Draft Horse Classic Series.  Enjoy the show!

In order to get into the BIG show at the Draft Horse Classic and better yet win a blue ribbon like this one you have to know how to drive really well.  NO not drive a car.  Drive a horse.  And in this show you have to drive BIG horses…..even though little horses can drive too.   The more horses you can drive at once the more classes you can enter.  Like this one in the photo above.  This class is called “Three and Four Abreast” 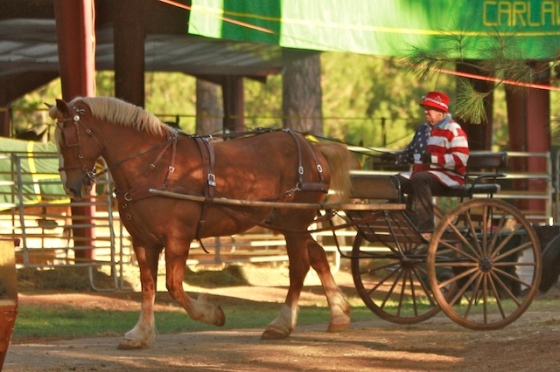 Now I am not an expert on driving big horses, or any horses for that matter,  but I do think you must have to start by knowing how to drive just one horse first.   And practice makes perfect.

I think this woman is driving perfectly.  Even though it looks like she already went to the BIG show and is now driving back to the barn without a ribbon, although she may be hiding it.

Something tells me it must have been or is going to be the Singles, Ladies Pleasure Type Class since another single lady is driving by.

But now she is picking up her man, brother, friend or whatever so I am not sure.  Where is my “Schedule of Events” when I need it?

So getting back to the “Three and Four Abreast” class.  Check out these beautiful Shires like the ones I featured before in my “Bathing” post.    Recognize the yellow?  Yup, these are the Big Feather Shires.  They are in the BIG show every night I think.  I’m going by this years program and this photo is from last year so I could be wrong about these names but I’m going to blurt them out anyway just because they sound cool.  Here is Charlie, Titan, Quill and Turbo.

And here are the pretty gray Percheron you saw in my “Showing” post last week.   I’m not sure of their barn name or horses names so I’m just going to say…….how about those dappled greys!   Two teams side by side make FOUR UP. 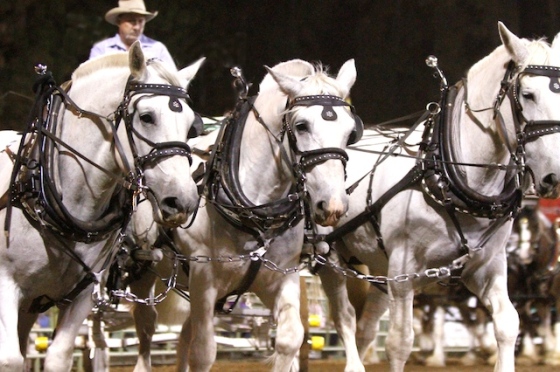 Here are some more stunning dappled grays THREE UP.

And here are the those handsome dark Percheron.    They looked kind of scary coming right at me. 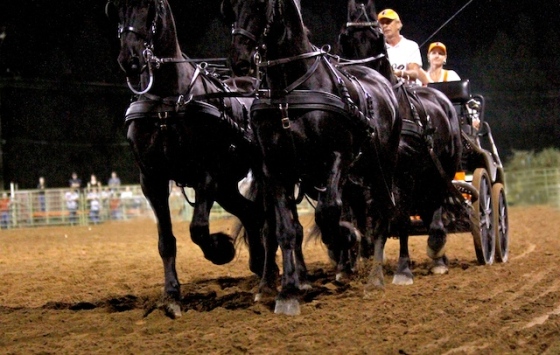 Also looking kinda dark and scary are these Friesian coming right at me.  The Friesian are a light draft breed, graceful and nibble for their size.  They were used by knights for fighting in the middle ages and are thought to be one of the oldest European breeds.   They look kind of middle age-ish attached to this chariot don’t you think?  This act with the chariot is a thrill to see although it is not judged during the show and just for fun. 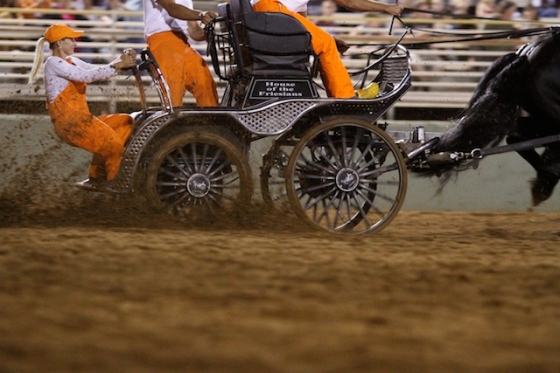 Look at them breeze by!  Mud flies everywhere and the crowd roars.   I just love orange and black together.    I believe this team comes all the way from British Columbia for the show.  The guy driving wears wooden shoes.  You can’t miss him.  He is a REAL good driver.  Oh yeah….Friesians are originally from the Netherlands.   That explains the wooden shoes.

And there they go.  Doesn’t that look fun being the balance on the very back? 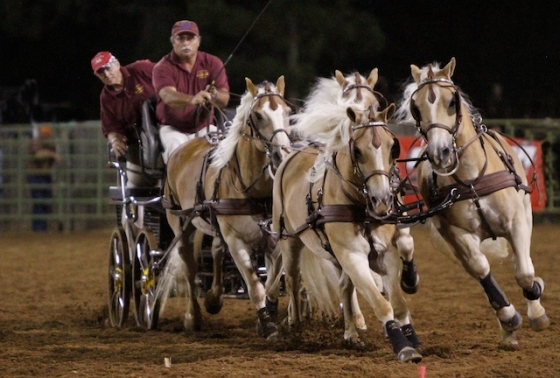 Besides the Friesian act for fun during the show they also have the Haflinger chariot ride.   Here are some facts about Haflingers in case you don’t know since it is a breed you don’t see around that often.  According to Wikipedia,  “The Haflinger, also known as the Avelignese, is a breed of horse developed in Austria and northern Italy during the late 19th century.  Haflinger horses are relatively small, are always chestnut in color, have distinctive gaits described as energetic but smooth, and are well-muscled yet elegant. The breed traces its ancestry to the Middle Ages, and there are several theories for the breed’s origin. Haflingers were developed for use in mountainous terrain, and are known for their hardiness. Their current conformation and appearance are the result of infusions of bloodlines from Arabian and various European breeds ” 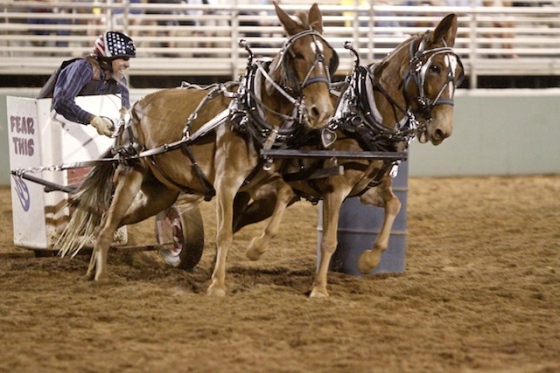 You will never believe another chariot act they have at the BIG night shows.  YES mules who are REALLY good at pulling things.  And this chariot racer went so fast I was sure he was going to tip over on the turns and the paramedics on the sidelines would be have some work to do.   But none of that happened.   Just gotta love those mules.

Oh and I almost forgot the Clydesdale FOUR UP.  There they go, those beautiful fluffy feet all done up….all four in a row.  For this show I got way down low in the media area.   It felt like the horses were checking ME out when they went by.

Do you know they even have a SIX UP competition.  SIX UP always comes at the end of the BIG night show.  That is a lot of BIG horses to train, bathe, braid and show.

Do you like beer?     These horses and teams like them used to deliver plenty of beer in the old days.  How would you like to back up this team to a busy loading dock?

This year we had some pretty heavy rains one day.  But that did not stop Cathy and Nattie, the two ladies with good attitudes, from competing in the Gambler’s Choice eliminations EARLY one morning.   Here they come.  No pretty costumes today.  Raincoats are in order.  Forget the fluffy feet.  The horses are not minding the rain one bit.  No pun intended.

Despite the wet footing and dark skies Nattie bombs through the course.  I did not know draft horses could be so nimble and quick.   I totally respect Nattie for her driving skills now. 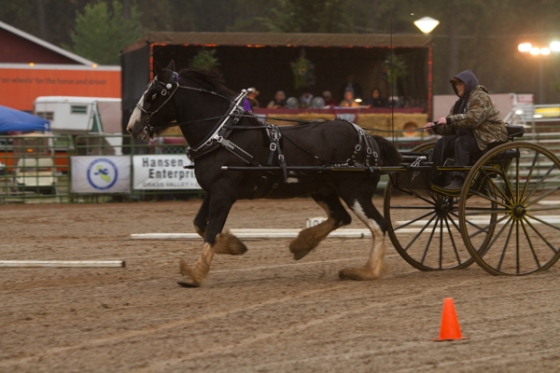 The course it timed so besides going through the obstacles correctly with out knocking anything down you gotta go pretty fast.

Cathy went fast too.  Even in the muddy sand.  Good thing she bought that raincoat at the Western trade show the day before.  She says that is why it rained. 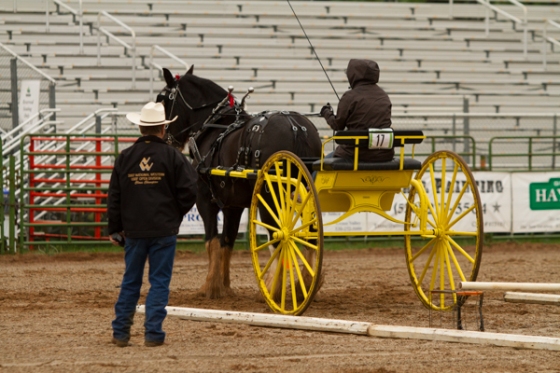 As Cathy backs up to an obstacle the judge is checking her out.  I was happy to be taking photographs and not having the judge eyeballing me like that.

Now I can’t end this post with mud and raincoats.  I’ve gotta show how these ladies get cleaned up and WIN. 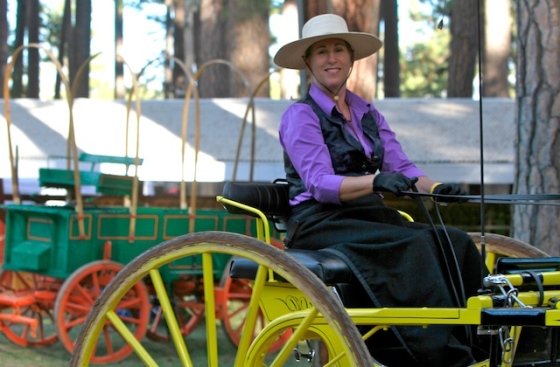 And here is one of my favorite photo’s of Nattie in 2012.  That is a famous smile.

And not only do these ladies know how to look good.  They can win.  Here is Cathy accepting a red ribbon a day after or maybe before that dark and rainy day last week.

And here is Nattie shining that contagious smile again and tucking a blue ribbon under her seat so she can complete her victory round around the show ring.  She is a VERY good driver as proven here.

That’s it for driving this week.  Tomorrow I have a quick post about the dogs of the draft show.  See ya then!

8 thoughts on “The Drift Goes Draft: The Big Show”